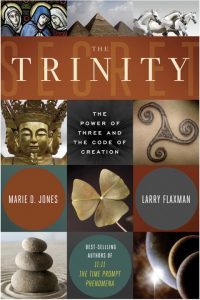 The Father, the Son, and the Holy Spirit.

Millions of people recognize the Holy Trinity, but few understand that the concept behind it is not limited to a single religion or belief system. What if the Trinity were an ancient code, a formula, a secret so simple yet so powerful, it could change the way we look at our relationship with the Creator and with creation?

The Trinity Secret began with the simple discovery that a trinity or triune nature plays an integral role in all that ever was, is, or will be. From religion, mythology, folklore and psychology to neurophysiology, quantum physics, and even the cutting-edge world of noetics and human consciousness – the concept of a trinity is universal. The number three is a profound and sacred number that speaks of a secret older than humankind.

Just a few of the famous trinities include: